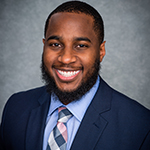 Dr. Walter L. Jackson II joined West Georgia Eye Care Center in July 2022. He specializes in comprehensive eye exams, contact lens fitting and evaluation, ocular disease treatment and management, as well as low vision rehabilitation. He is currently licensed to practice Optometry in Georgia and Alabama. Being a native to the Columbus/Harris County area, Dr. Jackson is excited to be home to provide exceptional eye care to the city of Columbus and surrounding communities.

After graduating from Hardaway High School, he went on to attend Georgia Southern University where he earned his Bachelors of Science in Biology with a Chemistry Minor along with his Masters in Applied Physical Science. He continued his education at the University of Alabama at Birmingham School of Optometry (UABSO) where he was an active member of Beta Sigma Kappa (BSK) all four years and graduated with honors earning his Doctor of Optometry degree. He also served as the National Optometric Student Association’s National President during his time at UABSO. After graduation, he completed his Residency in Vision Rehabilitation with emphasis in Ocular Disease and Low Vision Rehabilitation at the Birmingham VA Medical Center.

Dr. Jackson lives in Harris County with his wife, Adrianna, and son, Jax. He enjoys spending time with his family and being an active member of his local church.